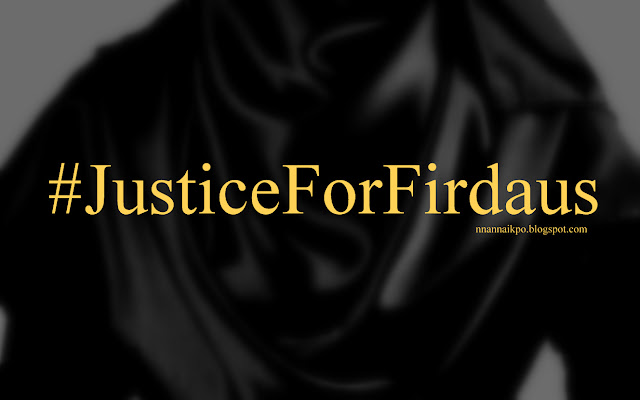 On 12 December 2017, a batch of Nigerian law students were admitted at the International Conference Centre(ICC), Abuja to the Nigerian Bar as barristers and solicitors of the Supreme Court of the Federal Republic of Nigeria. I recall thinking, in 2015 when I was called, that the my call was the biggest party in Abuja and possibly Nigeria. This is because at every call the world would be alive to watch the Nigerian law students' six or more years of study validated by the creme de la creme of the Nigerian legal profession.

I assure you, it is a big deal not just for the law student, but also peers, family, community and the rest of Nigeria.

At the 2017 call, Amasa Firdaus Abdulsalam, a young female muslim law student, was denied entrance into the ICC because she insisted on wearing the muslim hijab beneath her wig.  On the grounds of her visibly identifying as a muslim, she was denied her well deserved admittance into the Nigerian Bar. This denial is completely unacceptable. Section 38 of the Constitution of the Federal Republic of Nigeria 1999(as amended) which provides for the freedom of thought, conscience and religion frowns at it.  So does Article 3, 5 and 12 of the Protocol to the African Charter  on  Human Rights on the Rights of Women in Africa which provide for the rights to dignity and state duty to eliminate all forms of harmful practices which negtively affect the human rights of women; protect women who are at risk of being subjected to harmful practices or all other forms of intolerance; protect women from all forms of abuse in school(academic pursuit); Article 6, 23(g), 25 of the African Youth Charter which provide that states shall ensure that every young person shall have the freedom of thought, conscience and religion; eliminate all traditional practices that undermine the physical integrity and  dignity of women; provide educational sytems that do not impede girls from attending, eliminate harmful social and cultural practices that harm and are discriminatory to youth on the basis of gender, age, or other status; Article 4,5 and 8 of Nigeria's African Charter on the Human and Peoples' Rights Ratification and Enforcement Act (African Charter) which provide for the right to inegrity, dignity and the free practice of religion frown at this.

As always the social media and the real society has diverging stance on the issue of whether or not the system is legit in its withholding Amasa's acceptance into the Nigerian Bar on the basis of her insistence on wearing her hijab while being called. However, it is important to consider precedents on the interpretation of freedom of religion. The African Charter, though an international treaty, has been domesticated in Nigeria as a federal law and is as binding as every other federal law in Nigeria. Articles 61 of the African Charter permits that to interprete its provision, inspiration may be  drawn from legal principles, precedents, doctrines, customs generally accepted as law and recognised by African states. In this light, the decision of the African Commission on Human and Peoples' Rights (African Commission) on the scope of the freedom of  religion are a relelvant reference. Prince v South Africa (2000) AHRLR 57 (ACHPR 1997).

In Prince v South Africa the African Commission addressed among other things the scope of freedom of freedom of religion and its limitation. In this case, Prince argued that his freedom of religion was violated because the South African government denied him admittance into his legal profession on the basis of his use of cannabis (although for sacremental purpose as a Rastafari). The use of cannabis is generally illegalised by the South African Drugs and Drug Trafficking Act. He was made to choose between adhering to his Rastafarian beliefs and his professional career as a lawyer.

The African Commission in addressing the limitations of freedoms enshrined in Art 27(2) of the African Charter, held that human rights and freedoms may be restricted by the state. However, such limitation must be strictly proportionate  with, and absolutely necessary for the advantages, which are obtained. These advantanges include protecting the rights of others, collective security, morality and common interest. In Prince's case, restricting his freedom of religion based on his use of cannabis was legitimated based on the fact that cannabis is an 'undesirable  dependence producing substance'.

A similar restriction, as relied on the African Commission in Prince's case, was held by United Nations Human Rights Committee in K Singh Bhinder v Canada (communication 208/1986). In this case Bhinder, a maintenance electrician at a government owned Canadian National Railway Company, insisted on wearinga turban as prescribed by the Sikh religion as opposed to a safety head gear at work. Owing to this, his employment was terminated. Bhinder alleged discrimination. The Committee, in interpreting the Article 26 International Covenant on Civil and Political Rights(ICCPR)(on the rights to equality and non-discrimination) held that the law's requirement of wearing a safety head gear in employment  such as Bhinder's was 'reasonable and directed towards objective purposes that are compatible with the ICCPR, human rights, life, dignity, equality, safety...

The four principles are afloat here are those of proportionality, necessity, reasonability and legality.  Is there a particular ill that wearing the hijab resorts to? Does it violate anyone else's human rights? What purpose does the insistence of the management on Amasa's refusal to take off the hijab serve? Was it necessary for the protection of public morality or safety? Did Amasa's wearing the hijab violate any rule or law? Even if it violated a rule or law, how compatible is that rule or law with the pursuit of the welfare of the Nigerian people, the legal profession or human dignity generally? How reasonable was Amasa's being denied admittance into the legal profession on the basis of her insistence on being called wearing her hijab? If these questions and issues are thoroughly considered, we see that there was absolutely no legit basis for Amasa's being denied admittance into the Nigerian Bar.

The hijab is no cannabis; wearing it to the call to bar ceremony does not infringe on the collective security, morality or right of others like was the case in Prince v South Africa. It has absolutely no safety implication and violates no just legal requirement which exists in cognisance of the humanity, dignity and human rights as was the case in K Singh Bhinder v Canada. Refusing Amasa admittance to the Nigerian Bar on the grounds of her wearing her hijab is of no necessity besides fostering a practice that serves no essential purpose outside falsely role casting the Nigerian legal profession and the rest of Nigeria as a homogenous common law jurisdiction. What has been done to Amasa is totally unacceptable and is against the principles of proportionality, necessity, reasonability and legality.

Granted, Amasa's insistence on wearing the hijab is 'transgressive'. But  even in her seeming transgression she is well within the scope of her freedoms of expression and religion. Have not our legal history shown us that such 'transgressions'  are more salient than cowering silence and compliance, and should be more welcome than not? This is especially in a Nigeria where patriachy and inequality mostly go unquestioned, unjust conventions and practices mostly progress undisturbed. Undisturbed, untransgressed! Unjust practices which span from the ancestral era of slavery, colonialism and the killing of twins to the more contemporary ones such as the preclusion of female offsprings from inheriting family property, ruled against in Mojekwu v Mojekwu (1997); the requirement that married Nigerian women must provide the authorisation letters from their husbands while applying for a new international passport, ruled against in Dr Priye Iyalla-Amadi v Comptroller General, Nigerian Immigration Service and Anor (2009); the mob attacks inflicted on suspected homosexuals in Nigeria which still thrive unattended; unquestioned excesses by members of the police force. I could go on.

But, but, but, Amasa has not only decided to speak and act up, she has, through her firm stand, cast a light on Nigeria's greatest sin, intolerance. Nigeria is more than just a former british colony, it is a diverse territory overflowing with all sorts which the Nigerian state is bound by laws both national and international to protect, preserve and inclusively balance. We are anything, everything,  but homogenous. The fact that 'this is how it has been' is no longer good enough to secure our development as a people. We can test this against history, the past, against our hopes and dreams for our country, our youth, our future. There is a space for Amasa and her message at the Nigerian Bar. There is a space for diversity and inclusion in Nigeria.

The call is such a symbolic ceremony for every Nigerian lawyer because it is an ushering into a life time career of speaking up and standing out. Most of us may never get to do this even after being called. Amasa, however, decided to begin her career with her call ceremony. What has been done to her is a great injustice. It will even be a greater injustice to stall her career for another year. There is no greater humiliation than this. This humiliation shall poison our youth with cowardice and fill our streets with impunity.

As a queer Nigerian man who understands the evil of intolerance and the repression of unquestioned conventions, I join my voice with Amasa Firdaus Abdulsalam, and several others, to demand the following from the leadership of  the Nigerian Law School,  Council of Legal Education and Nigeria:

1. The revisiting of the dresscode for the Nigerian Law School and Call to Bar ceremonies to include the wearing of hijabs;

2. A public apology  to Amasa Firdaus Abdulsalam for denying her admittance, alongside her peers, into the Nigerian Bar on 12 December 2017;

3. That Amasa Firdaus Abdulsalam be called to the Nigerian bar with all the due rights and privileges conferred on her.

4. That the fulfiment of the above request (3) be deemed, for all intentions and purposes, to have been done on 12 December 2017 as was the right date of her call.

I celebrate you Amasa Firdaus Abdulsalam. I stand with you. Your ruggedity has begun a stampede. You are on to great things.

(I write this is in my capacities as a Nigerian lawyer and storyteller, none other)